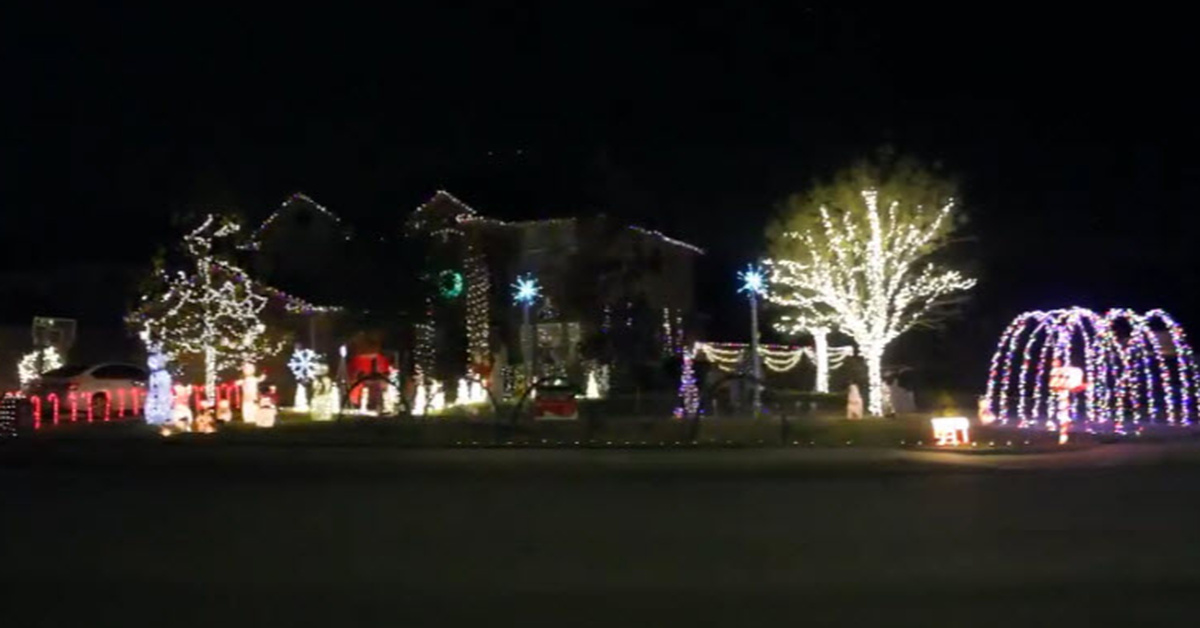 Have you ever had one of those songs that just seems to get stuck in your head and won’t leave? Perhaps you visited the Magic Kingdom at Disney at some time in the past and went on the ‘Small World’ ride. That song is sure to be stuck in your head for weeks, if not months. It is a phenomenon that is known as having an ‘earworm’ and it happens to all of us. For parents, one earworm that is undeniable is the children song, “Baby Shark”.

It seems as if somebody has taken the Baby Shark song and put it to some holiday lights. The display is seen in Boerne, Texas and we can only imagine the nightmares that the neighbors are now having. The holiday display synchronizes the lights with that viral children song and when you see it for yourself, you will have to admit that it is both a great thing and a terrible thing at the same time. Apparently, the Internet agrees.

These lights are seen every year in the neighborhood. They are locally known as the Hinojosa Family Lights and they sync music with over 100,000 bulbs.

And I just realized I became a sort of older-ish parent. I have a 10 and 6 year-old. No idea what this song was.

I but the neighbors are happy that ‘Baby Shark’ is not the only song playing. The lights also flash along to some Christmas Classics and songs from the Pixar movie, Coco and others.

You can’t escape the ‘Baby Shark’ song, not even in holiday light displays #8Q_XLydNwqOL via @mashable pic.twitter.com/4do61IeFME

There is a donation box outside to raise money for local families that have a need. last year, they gave the proceeds to a nonprofit run by a neighbor, Warrior Chef.

Twitter was both happy and shocked by the lights:

Someone sync your Christmas lights to Baby Shark

CALLING ALL BABY SHARK FANS! 🦈 head on over to the Happy Family Hub Facebook Page (@happyfamilyhub) to check out the 7 Henson Park Christmas lights display in Somerset to that oh so popular tune (sorry for the earworm) – raising money for @dsairambul… https://t.co/xepmx7Ttz1 pic.twitter.com/a11gPGNRrn

Today, I’m thankful for the absolute madman in my neighborhood who synchronized his Christmas lights to the Baby Shark song. pic.twitter.com/u3DfIni9OV

Of course the holidays are all about ‘Baby Shark’. Enjoy the song, you can’t get away from it.